Worry Not: Our Hobbies Are Safe from AI 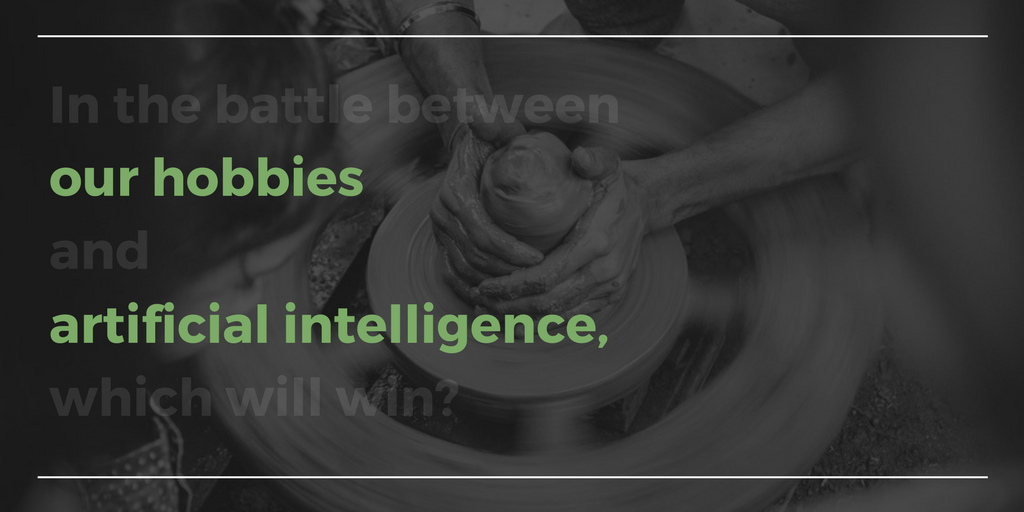 That Futurism post does have a rather sinister-sounding headline—“An AI Completed 360,000 Hours of Finance Work in Just Seconds”—and goes on to explain that JP Morgan is using a new machine learning algorithm called Contract Intelligence (COIN) to review new contracts for potential errors. According to the company, this could save hundreds of thousands of human hours—hours that are now spend performing rather simple, repeatable tasks.

Fearmongering aside, it seems like another example of a company simply finding efficiency where there used to be waste. It’s not fundamentally different than a plastics manufacturing company discovering that using a conveyor belt to move pieces from the injection molder to the shipping area could save someone from doing it by hand.

Of course, all of us at SSD Nodes think about the future of AI all the time. We worry and we wonder about the implications for the entire IT industry, and all its unique niches.

Even then, technology doesn’t tend to steal jobs from the people who used to do them before, whether its a lawyer dealing with contracts, or a plant floor worker who manually picked and placed widgets. More often than not, the company finds other, more profitable work for these people.

Of course, there have been notable exceptions—even then, the day that AI takes over the jobs of web developers is, most likely, still decades away.

Has anyone looked at The Grid lately? It purports to be an “AI web designer” where you can “just add content, it designs itself, it’s your piece of a new kind of internet.” (All of this leaves us wondering if the copy is AI-powered, too.)

The design is good—great, even—but the AI-driven flaws are revealed once you open up some developer tools to see how it works behind the scenes.

On most modern-day sites, the tagline is typically placed within an h1 element that is generally nested inside of a container element, maybe two containers, and then the body element. On our homepage, it’s pretty straightforward.

And, yes, we know that our blog is not quite so streamlined. It bugs us, too. Now, compare our homepage to the AI-generated version on The Grid:

To someone who doesn’t understand web development, the page looks fine, but anyone who has ever designed a webpage—whether for work or fun—immediately understands the non-semantic, inaccessible nature of those extraneous divs. That’s a ton of extra bits to send across the wire, and makes any maintenance nearly impossible. Can anyone explain the difference between #faf-context-0 and #fan-context-0?

Let’s also not forget that the typical pageload is about 11.3MB.

But that’s the nature of AI—right now, it needs to be broad enough (aka dumb enough) to eventually make the right decision. That’s why it needs all those nested elements. It can’t just beeline toward the best result, which is probably some simple flexbox grid controlling a flex container element, a few flex items, and then tagline itself inside one of those items.

That’s why we don’t worry about AI taking jobs away from developers, or anyone in IT, any time soon. Humans are good at thinking on their feet and solving problems. AI is good at predictable work with clear parameters that humans have already mastered. Once we whittle web development down to a series of IF/ELSE statements, sure, let’s like AI take over.

Which leads us to the more important fact: AI will never make our hobbies obsolete.

Hobbies are incredibly robust, almost to the point of ridiculousness—we have machines that can create perfect ceramic cups day in and day out, but that doesn’t stop people from sitting behind a potter’s wheel to figure it out for themselves. The same thing might happen with web development some day—we might have AI webdevs that are capable of doing a very mediocre and serviceable job at creating a basic landing page, for example. That shouldn’t stop us, either.

That’s part of what makes SSD Nodes so exciting for us—we have the privilege of hosting developers and startup dreamers who simply want to do what they love in the best way they know how, and turn their hobbies into something more. We love being the home for where a small idea becomes something far more.

And just like we don’t ever believe that AI will replace the work that we do, we simply refuse to believe that algorithms are coming for the creativity we see built on top of the SSD Nodes platform day in and day out. So, no, AI is not going to replace all the webdevs out there (serious). Not by a longshot.