What’s Next for SSD Nodes: KVM and Containers 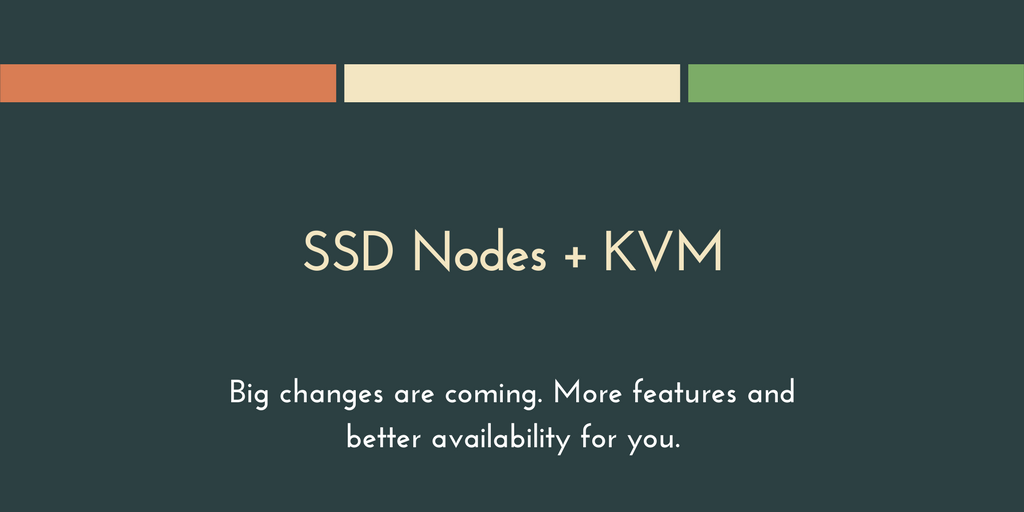 Here at SSD Nodes, we field a lot of feature and infrastructure requests from our customers. Of them all, the most prevalent might be: "When is KVM coming? When can I run Docker?"

It's a fair question, and one that's bugged us for a long time.

To take a step back, let's talk about OpenVZ, which is the current backbone of our operation. OpenVZ is a stable and powerful platform. Because it's using OS-level virtualization, the single shared kernel reduces memory and CPU usage across every VPS. It also allows us to scale specific VPS containers instantly and without downtime.

Of course, OpenVZ isn't perfect. It's limited to Linux distributions, and because it uses a shared kernel, you can't install a specific kernel version if you need to, or want to. OpenVZ 6 is based around a 2.6 kernel, which is not a supported configuration for Docker, which only officially supports kernels 3.10 or higher. If you run uname -a on your VPS right now, you'll see that our platform is running on the 2.6.32-042stab120.16 kernel.

KVM, on the other hand, is full hardware virtualization that allows you to install whichever kernel you'd like, or even a Windows VPS if you'd like.

A few months ago, we launched new data center locations in Seattle and NYC to give you the most choice and flexibility. That's what we're doing here, too.

So, in short: we're really close. The system is up and running, and we've thrown our engineering minds behind it. Essentially, we just need to ensure that every process is documented and then we'll be ready to launch.

Virtuozzo is the enterprise-level version of OpenVZ—they're based around the same core components, but with significant improvements. Most notably:

On top of that, Virtuozzo enables some other compelling features, such as automated snapshots and integrated backups/restores. There's also more flexible storage options, which allow us to create more unique packages or add-ons for those who require more disk space for their applications.

Right now, our physical servers are the lifeline for every VPS—if that server goes down, so do all the clients. That's not good.

Instead, Virtuozzo creates a distributed, highly available storage system, where the disks are separated from CPU/RAM servers. If a disk fails, it can be swapped out easily with no downtime. Even if an entire disk server fails, the load is dynamically spread across the other servers until we can get things back up and running again. If a CPU/RAM server goes down, those customers will get automatically rebooted on another. We pride ourselves on our availability, but this is yet another step in the right direction.

On top of that, Virtuozzo will make our hardware operations more efficient. Right now, we operate best when we our storage, CPU, and RAM are all equally utilized, but that's rarely the case. Our Montreal location runs out of RAM first, while in Dallas, storage gets eaten up, leaving underutilized RAM. By splitting CPU/RAM and storage into separate clusters, we can add only a CPU/RAM server when that's running low, or only a storage server when we need a few more TB to offer up.

These changes are going to make our operations more efficient, at higher availability, even as we offer more features to our customers. So, for us, this is an exciting next step in growing SSD Nodes to new heights.

Stay tuned for more details—we'll be sure you don't miss the official launch in just a short time.