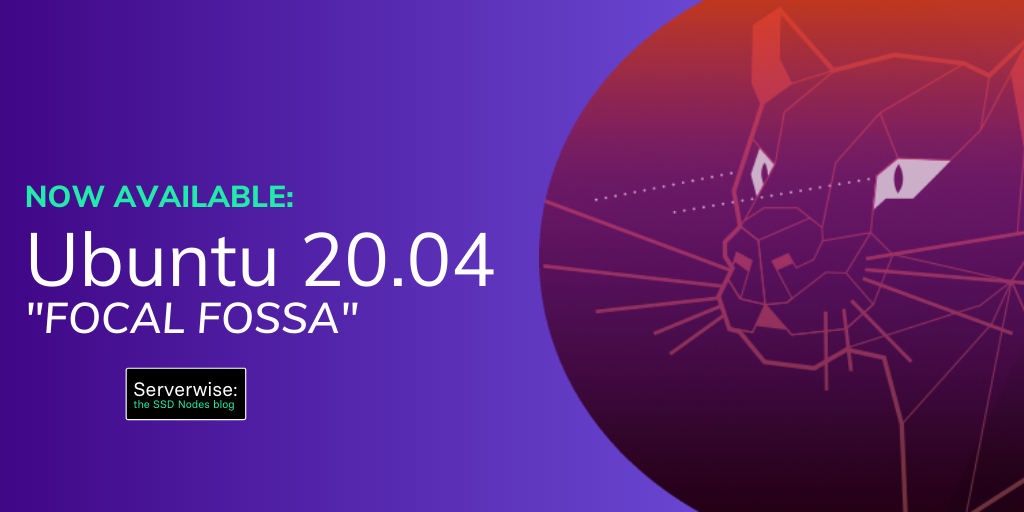 Hey everyone! We're excited to announce that as of this weekend Ubuntu 20.04 LTS is available to all SSD Nodes customers. You can either select it as your distro when you purchase a new server or change your server to 20.04 in your dashboard (this will wipe your server, though, so you'll need to save your data if you go this route).

Like all Ubuntu Long-Term Support (LTS) releases, Ubuntu 20.04 LTS "Focal Fossa" comes with 5 years of security support, which makes it the perfect platform for building your next great idea!

In the meantime, the super-popular Ubuntu 16.04 LTS will stop being updated next year (unless you want to pay for extended support), so now is the perfect time to start thinking about migrating your projects to the newest Ubuntu release.

Beyond that, Ubuntu 20.04 adds some new security and feature updates. And improved support for new technologies.

Focal Fossa offers you a few great incentives to move on from Ubuntu 18.04 "Bionic Beaver." You can read about them on the official release at the Ubuntu blog, but we'll recap some of our favorite advantages here:

It's based on the Linux 5.4 kernel

By building Ubuntu 20.04 using the most recent Linux kernel, the distro benefits from some new features, like an advanced kernel lockdown mode that helps protect your Linux system when you root account is compromised. It also offers support for virtio-fs, dm-clone, Fs-verity, and Microsoft's popular exFAT file system.

It's got a built-in VPN (WireGuard)

We've been long-time fans of OpenVPN at SSD Nodes, but we do see that people are starting to look for other options. WireGuard has become a trending topic as of late, and for good reasons. Now that it will come by default on Ubuntu 20.04 (it will also be backported to 18.04) it looks like its star is definitely on the rise. Ubuntu will now have an out-of-the-box VPN solution that offers sophisticated cryptography and minimal setup. It's a pretty big deal.

Ubuntu updates will be faster and easier

The new Ubuntu Server Live Installer now lets you access updates to Ubuntu immediately (and automatically) without waiting for point releases. This means you'll get quicker access to patches and bug fixes, without any extra effort.

You're used to 2-factor authentication at this point on everything from bank accounts to your email provider...so it only makes sense that you'd use the same tech to protect your server, right? Ubuntu 20.04 makes this possible, enabling physical or app-based authentication to create an SSH session. Maybe not the sexiest feature, but it could save you some major headaches (or worse).

New versions of popular languages (and goodbye to Python 2)

Some of the most requested languages, like Python 3.8, OpenJDK 11, PHP 7.4, Go Lang 1.13 and more, are ready to be installed straight from the official repositories. Plus, you won't need to install Python2 for using Ansible or the clang-toolchain. Python 2 went End-Of-Life last winter, and Ubuntu 20.04 LTS helps you get rid of any remnants of it.

Ubuntu 20.04 uses the lz4 compression algorithm for the initramfs and the Linux kernel. This algorithm is much faster than it's predecessors which means you get much faster boot times. For desktop users, the new release ships with Gnome 3.36 desktop, so upgrading your workstations gives it a much-needed cosmetic facelift! Systems engineers will be pleased to find updated system libraries and compiler tools chains, including glibc 2.31 and newer versions of gcc and clang.

If you're picking up a new VPS today, then go ahead and just select Ubuntu 20.04 LTS at checkout.

You can try to upgrade now, there are some guides out there but do so at your own risk. We can't help you out (other than restoring backups, if you've got them) if something goes wrong. The official point release enabling upgrades from 18.04 to 20.04 will be released in July.

We'll share some more details on Ubuntu 20.04 LTS and its features-- like how to setup and configure WireGuard-- in the coming days and weeks, so stay tuned!