Welcome to the fourth page of a handbook on self-hosting. Begin here. Read the previous page here. On this page, we’ll cover how to handle self-hosting administration, from system updates to making sure your containers are in tip-top shape.

Topics covered on this page

What's self-hosting administration all about?

Generally speaking, a self-hosting infrastructure requires quite little in the way of maintenance and upkeep. Of course, the stakes depend entirely on your unique application.

I’m using my self-hosting stack only for myself, and I’m not running any services I couldn’t go without or duplicate with another app/service I already have on my machines, so I don’t worry about things like nine nines of availability. For example, my self-hosted Nextcloud folder also syncs up with Dropbox via a symbolic link on my desktop, so all my critical files are within reach if (and probably when) I bring my VPS down.

Here are some of my recommendations:

Update your primary system regularly. I think once a week is fair enough—you’ll get the latest security updates, which will help keep your VPS secure. You can also enable automatic updates on Ubuntu servers with two simple commands:

Check running containers. If you’re already hopping onto your VPS to perform an update, while not also run a quick docker ps?. I’m embarrassed to admit this, but I’ve created test servers with… lax security practices, only to find my VPS running some cryptocurrency miner via a Docker container. A quick ps ensures you know what’s going on, whether that’s a breach or merely a container gone awry.

Create backups! While you can destroy and recreate containers at will without losing your data—thanks Docker volumes!—you can’t predict a catastrophic event. I use a second server as a backup server, and use Borg to synchronize files from one to the next. There’s no automatic restore process, but at least the data duplicated. We’ll soon be posting a guide on backing up your VPS to your local machine, and I’ll be sure to link it here.

Of course, you’ll also want to do some best practices on security, such as running a firewall and something like fail2ban to block malicious access attempts.

And a few things to avoid:

Don’t update the packages inside of your containers. While it’s possible to actually “log into” your running Docker containers using docker exec -it ..., and in theory you could then perform an apt-get update && apt-get upgrade inside of them, I strongly discourage this. Many Docker images are crafted using specific package versions and configuration files, which could conflict or be overwritten via an upgrade. We’ll cover smarter updates in a moment.

In theory, updating your Docker containers is easy. In practice, it may be more complex than the following explanation makes it seem.

Each container is based on an image. These images are kept in the Docker Hub and pulled to your machine when you first ask Docker to run a container. The developers who create these images might update them, for example, to use a newer version of PHP. If you want the latest and greatest, you’ll want to update your images and then use them to recreate your containers.

This update process is incredibly simple:

The first command will pull all the newest Docker images from Docker Hub and then recreate them as needed.

Here’s what happened when I followed this process just now:

As you can see, Docker pulled a handful of updated images from Docker Hub and recreated them, all without any hassle. The reverse proxy took about 15 seconds to re-register all the services, and everything was back up and running!

If you’re still not convinced, here’s what the Docker developers say about this process:

If there are existing containers for a service, and the service’s configuration or image was changed after the container’s creation, docker-compose up picks up the changes by stopping and recreating the containers (preserving mounted volumes). To prevent Compose from picking up changes, use the --no-recreate flag.

Compose preserves all volumes used by your services. When docker-compose up runs, if it finds any containers from previous runs, it copies the volumes from the old container to the new container. This process ensures that any data you’ve created in volumes isn’t lost.

There are a few caveats to this method of updating:

Many apps have their own update mechanism. Nextcloud, for example, will automatically update its codebase via another system entirely, which makes updating the Docker image useless.

Without volumes, you’ll lose data. If you don’t set up your docker-compose.yml file to use Docker volumes for your data, and instead store data inside the container itself, you’ll ax it during the recreation. Better to use volumes at all times.

Beware of complex migrations. Let’s say that a service you’re self-hosting has moved from one major version to another, which includes a complete refactoring of how it accesses its database. The developers behind this service need everyone upgrading from one version to the next to perform a specific migration process. If you pull the new image without performing the migration, you’ll run into issues in this example. Fear not—such migrations and special upgrade processes are rare, but prove the point that performing updates without any research and planning can lead to big headaches!

When you update images via the above process, Docker doesn’t just delete the old ones. Instead, it holds onto them, just in case you might need them again in the future—call it a bandwidth-saving feature. Over time, you’ll end up holding onto a lot of obsoleted Docker images. Check out how mine have built up in just a few short weeks (visualized via the wonderful Portainer): 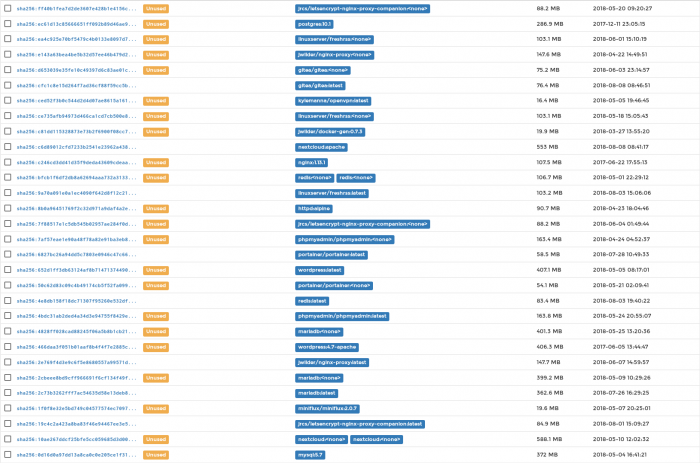 All in all, these Docker images are taking up 5.7GB of disk space, whereas, by my back-of-the-envelope addition skills, the used images should only need about 1.5GB of disk space. That’s quite a bit of unnecessary overhead! As with all good and growing things, there comes a time for some pruning.

Enter docker system prune—this single command will remove all stopped containers, all extraneous networks, all dangling images (those not referenced by other images), and all the build cache. Here’s what happened when I ran it on my self-hosting VPS just now:

Not bad, eh? Here’s what Portainer reports after this pruning:

You’re safe to run docker system prune whenever you feel like your disk space is rising—it all depends on how often you’re creating/destroying containers, updating images, or trying (and perhaps abandoning) new images.

An even deeper image cleanup

You might have noticed that, in the image just above, I removed many Unused images, but not all of them. That’s because docker system prune deletes only dangling images, not unused ones. If an image is dangling, it’s also unused, but an image can be unused but also not dangling. Got it?

Since I don't feel like keeping an OpenVPN image around any more, it's time to dig a little deeper.

Docker has created a number of prune commands, and this time, we’ll use prune in combination with docker image. We’ll also add a -a option to specify that we want to remove all unused images, not just dangling ones.

And now, the results via Portainer:

The prune command also works with other Docker systems, such as docker network prune, docker container prune, if you’d like more specificity with how you clean up your self-hosting stack.

A note on volumes: You might have noticed that by default docker system prune doesn’t touch volumes. That’s because volumes are where your personal data is kept, and one accidental delete will mean you’ve lost your data. You can try pruning volumes via docker system prune --volume or docker volume prune, but I can only recommend you proceed with caution. I’m not about to run either of those on my own system, thank you very much.

If you want to take your self-hosting experience to the next level, and either have a secondary (or even tertiary!) VPS available to you, I highly recommend looking into Docker Swarm. You can combine your docker-compose deployment scheme with Docker Swarm to create a load-balanced, self-healing infrastructure, which is pretty darn neat.

For now, this process is going to remain outside of the handbook’s scope, as I think most people won’t need a cluster for self-hosting.

But, for those who are curious, we have an excellent tutorial on getting started with Docker Swarm.

Next: Into the unknown!

The fifth page—Self-hosting Nextcloud with Docker—is now available! The sixth, seventh, and nth pages of this handbook are coming soon. Next, I’ll cover how to add specific apps, such as Nextcloud or just a plain 'ol Nginx web server, to this stack.

Bookmark this guide and follow us on Twitter or Mastodon to get updates. Or, you can subscribe to the weekly Serverwise newsletter, where I’ll let you know as soon as this guide expands.