NVMe Cloud Hosting: Everything You Need To Know

If you’ve already heard about NVMe cloud hosting before arriving here, congratulations! You’re among a small minority of future-thinking developers who are already looking for the next big thing in cloud hosting. But even if you haven’t, we’re happy to have you here, as you’re about to wade into some pretty next-generation waters.

NVMe disks are pretty new, and definitely haven’t gone mainstream yet. Getting one for your personal computer is pretty cost-prohibitive still, and that’s what makes the cloud so compelling—you can, pretty cheaply, get a piece of an NVMe drive in a high-speed data center for a much smaller investment.

Of course, NVMe cloud hosting is much more than just a drive. Let’s dive in.

Power up your hosting with the 10x speeds of NVMe starting at just $9.99/month.

Get a supercharged 8GB RAM VPS featuring NVME starting at just $9.99 per month at SSD Nodes. Our KVM-virtualized servers are Docker-ready, ultra-flexible and ready to deploy in 60 seconds. Start developing today!

An acronym within an acronym. Great.

NVM stands for non-volatile memory, which refers to memory which retains its stored data even after losing and regaining power. All the common disk storage technology, such as spinning disks and solid-state drives, are non-volatile memory.

In contrast, volatile memory is that which loses its data when power is cut. Your machine’s RAM is a great example. 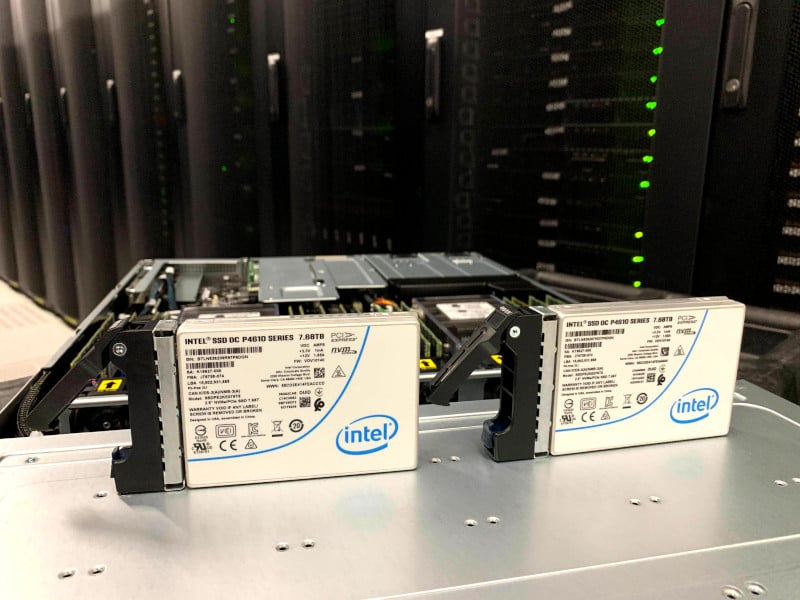 We can now infer that an NVMe drive uses non-volatile memory technology that retains its data when power is lost. In other words, you can save your files on an NVMe drive and expect them to still be when you reboot.

We need to pause a moment to explain what a solid-state drive (SSD) is, because things get a little confusing from here.

You might have heard of SSDs before. (Hint: They’re in our name!) SSDs are form factor—a certain size and shape of hardware—and use solid-state storage technology to store your data using, most commonly these days, 3D TLC NAND-based flash memory. Solid-state storage is a type of non-volatile memory and uses only electronic circuits to read and write data.

So, both SSDs and NVMe disks use solid-state storage to store your data. But this whole piece is about what NVMe is and why it’s better. What’s the difference?

The answer is in the NVMe.

The e in NVMe stands for Express, remember? In this case, Express refers to the new hardware interface protocol that was “designed to capitalize on the low latency and internal parallelism of solid-state storage devices.” (source) This means than an NVMe drive connects solid-state storage to the rest of the machine using a newer, faster interface.

That’s the difference between an SSD and NVMe drive: Both use the same solid-state storage technology to hold your data, but NVMe uses a much faster hardware interface.

Breaking to all down

When we say “SSD,” as in “SSD cloud hosting,” it means that we’re talking about solid-state storage connected via slower SAS or SATA interfaces.

When we say “NVMe,” as in “NVMe cloud hosting,” we’re talking about solid-state storage connected via the next-generation Express interface.

Our history with NVMe cloud hosting

As our head of engineering Daniel outlined in his NVMe launch post, we’re been looking at NVMe for white some time now. Crafting part specifications, finding vendors, and putting all the pieces together simply takes time.

But NVMe cloud hosting has come to SSD Nodes! To learn more and deploy a 10X server of your own, visit our 10X product page.

It’s so good we might have to rename ourselves NVMe Nodes.

Daniel has the goods on our exact hardware:

Eventually, we insisted that vendors use Intel DC P4610 NVMe drives with a U.2 interface. (We needed the 7.68TB drives, as nothing on our platform is small). … They were a brand we know and trust, as we already use a lot of Intel SSDs in production, without a single failure.

Why it’s faster and by how much

As I mentioned earlier, the Express interface is a vast improvement over previous SAS/SATA interfaces. Let’s grab a few choice quotes from Daniel for some numbers:

A good SSD drive might be able to read 550 megabytes of data per second (sequentially) and write 520 megabytes per second, assuming it is connected to a fast SAS or SATA disk interface.

This same drive might be capable of 10,000 input/output operations per second (IOPS) random read as well.

We can now make the pretty direct comparison:

The difference is pretty clear: NVMe offers about 6X faster data transfer and up to 60X better IOPS performance. We do that one a little better by mirroring all our customers’ data across multiple drives.

We effectively double our read performance (shared by all customers on the host node)—the equivalent of 6,400 megabytes per second and 1,280,000 IOPS random read.

All in all, NVMe is already a proven storage technology that’s going to change the way we use computers. Eventually your desktop/laptop will have an NVMe drive inside it, and you’ll experience the speed while gaming or opening a giant PDF. But, when it comes to servers, NVMe is already here. And, based on the feedback we’ve already gotten, it’s a definite revolution.

It’s like the move to SSDs that happened years ago, but now on hyperdrive. We’re excited to see what our users do with it.