At $10 a month, I would be concerned with serious overselling with those specifications and very outdated hardware.

Deal seems to be good but chances are there that the server will be oversold.

We understand the assumption. We see it all the time.

I pulled both of those comments from a recent WebHosting Talk thread. While SSD Nodes isn’t mentioned, it’s not hard to deduce that we’re the VPS provider in question. The fact that no one knows that the original poster is talking about us, which means that each of the replies is unbiased in its assessment of the facts (how much RAM/disk/etc. for how much money), offers a genuinely transparent look into how people perceive what we’re offering.

Before I get into rebutting those comments, it’s time for a short story.

While mountain biking with a friend just before sitting down to write this very post, we chatted about that adage about having to pick only two between strong, cheap, and light. I had just broken my rear derailleur—that strange, somewhat claw-like mechanism lets you move from one gear to another—and I was lamenting the fact that bikes with gearboxes weren’t commonplace yet. That was when he threw the “pick two” dilemma my way. I could go out and buy a gearbox equipped bike today, but prices for the Zerode Taniwha can easily reach $10,000.

My friend is an engineer, hence the focus on materials, but it’s not hard to make the jump into VPS territory: choose two between fast, cheap, and reliable.

When talking about VPS providers and plans, people tend to operate within that mindset. They see the plan’s specs and price, do a little mental map, and decide as to where it falls within that never-crossing Venn diagram. They see how much RAM we offer per dollar and assume that we’re highly oversold, as that seems like the only way to make the economics work.

That’s why we’ve launched a new feature to prove that we’re not oversold. And it’s something that no other VPS provider is willing to talk about, much less put some data behind.

Back in July, we quietly introduced a new section on our our homepage. Scroll down about halfway and find our usage graph, which displays the average hour CPU usage across our infrastructure of host nodes over the last 24 hours. 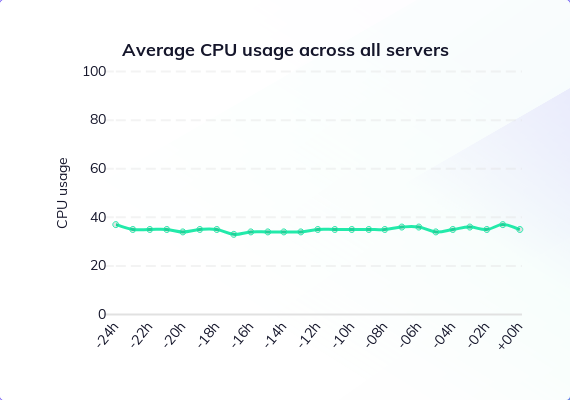 A telltale sign of an oversold VPS provider is high host node CPU usage. If the host node has no more CPU power to deliver to its many many servers, that’s when VPS users start to see the massive slowdowns commonly attributed to overselling.

As you can see, both in the static image about and on our homepage itself, our CPU usage trends between 35 and 40% of maximum. Plenty of room to handle the burst CPU capacity that we’re happy to offer our users in their times of need, like when they get a surge of unexpected traffic. That’s unquestionably not oversold.

We hope the usage graph (along with our other honesty efforts), helps offer a bit of necessary transparency into what we do and what makes us different. We don’t want to copy the entrenched VPS providers—we want to try different, exciting things, and the usage graph is just the first of many steps we’re planning.

We won’t be able to dig into every detail about our infrastructure, as we have plenty of proprietary code we can’t share, but the top-down view is that we’re running some sophisticated systems to ensure resource isolation between one server and its nearest neighbors. And, unlike one other VPS provider (no names, but have a bird, of all things, as a mascot) who just figured out that Intel’s Skylake architecture is a thing, we’ve been building our host nodes with newer Intel Gold/E5 CPUs for years.

So, I’m not going to argue that we’re as fast as dedicated hardware that cost 10X more, but we’re certainly not oversold. As far as cheap goes, the proof is in the pudding—we offer a VPS with 16GB of RAM for $[price]/mo, which means you get 10X more RAM for your dollar compared to that aforementioned-but-unnamed competitor.

And as far as reliable goes—I guess you’ll have to buy a server and see for yourself.