How to choose a Linux distro that’s right for you 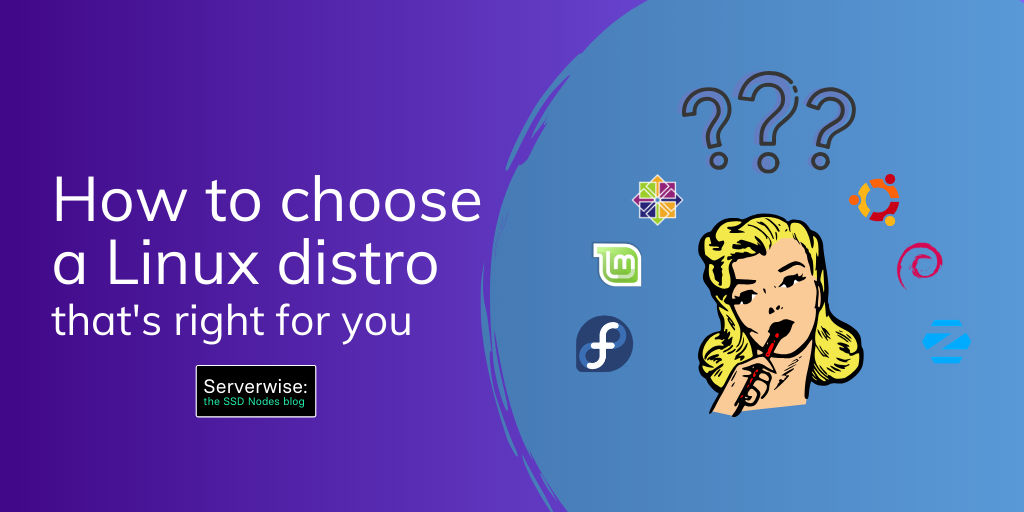 As a beginner, figuring out how to choose a Linux distro that's best for you can be an intimidating proposition.

There are literally hundreds (upon more hundreds) of Linux distros in the market, with distrowatch.com listing just the top 100 in order of popularity.

And because Linux is an open-source operating system, there are still even more distributions in active development.

So where should you begin?

How do you choose a Linux distro suits your needs?

Do you even know what your needs are yet?

In this guide, we shed light on the key factors to consider to make an informed decision about the best distro for starting your Linux adventures.

What all flavors of Linux have in common

Before we talk about how to choose a Linux distro, let's take a step back and talk about some aspects that all distros (or flavors) have in common.

At the core of any Linux distribution is the kernel.

The kernel interfaces the hardware components of your PC such as the keyboard, and monitor with the software. The kernel was first written by Linus Torvalds in 1991. Since then, tons of contributions have been made to the kernel by a large community of developers-- so many, in fact, that over 8 new updates are accepted every hour!

Another fundamental aspect common to all distributions is the presence of the bash shell.

The bash shell descended from the original Unix Bourne shell. Although there are other shells like zsh or ksh, bash shell is the de facto shell in most flavors.

The bash shell ships with tons of GNU utilities or bash commands. These commands include cp, mv, ls, mkdir, rm, pwd, and touch, just to mention a few. The basic Linux commands (bash commands) are universal and will work the same way regardless of the Linux flavor.

What are the key differences between Linux distros?

One of the differences between various Linux distributions is package management.

Package management refers to how a Linux system manages its software packages. This involves installing, updating, upgrading and removing packages.

Debian-based distributions such as Ubuntu, Mint, Debian and Kali use the package manager APT.

YUM is used for RedHat-based flavors such as CentOS, Fedora, and RHEL (RedHat Enterprise Linux). In newer versions, however, YUM has been replaced by DNF.

Arch-based distros such as Manjaro have Pacman. ArchLinux has a software repository called AUR (Arch User Repository) that hosts packages developed for ArchLinux. For auser to download packages from this repository, they need an AUR helper. Examples of these AUR helpers include yay, pakku, and Aurutils.

If you're like most of us, then one of the major factors in choosing a Linux distro will be the cost.

Of course, Linux is a free operating system, but some flavors such as RHEL (RedHat Enterprise Linux) and SUSE Linux Enterprise are commercial distributions that require licensing for users to get access to all software packages, bug fixes, security updates, and extended support.

But if you're just getting started, you shouldn't need to worry about this. There are tons of great distros to choose from that are completely free.

Different Linux flavors ship with different software utilities that are installed by default, including the preferred desktop environment.

Many newer flavor releases such as Ubuntu, Debian, Fedora and CentOS ship with GNOME desktop environment. Mint uses Cinnamon as the default desktop environment, which is an excellent choice for beginners that want something that looks and feels more like a Windows desktop. And Manjaro ships with the highly-customizable KDE Plasma desktop.

How to choose the right Linux distro for your needs

Selecting the right Linux flavor should not be a herculean task despite the hundreds of distributions at your disposal.

Depending on what you are looking for, you can always find one or two distros that are tailored for your needs. Making the right decision on the distribution to go for usually boils down to these factors:

How are you going to use Linux?

When choosing a Linux distro the first question you should ask yourself is: what am I going to do with it?

The range of uses for Linux are as wide as the variety of distros available. Once you have answers to these crucial questions, you're well on your way to choosing the right distribution for your needs.

Usability / Ease of use

As a beginner trying to find their way in the Linux maze, you will definitely want to pick for a user-friendly flavor that will give you an easy time at the start.

Developers have actually come up with flavors that mimic Windows and that can be ideal for those looking to make a foray into Linux. Zorin OS is the closest we have to Windows 10, while Chalet OS is great for those people still mourning the death of Windows 7.

Debian and Ubuntu are also popular among beginners. They come as a standard option with a lot of well-priced VPS providers like SSD Nodes and because they're so popular you can find easy-to-use tutorials for just about anything you want to do with your Linux machine.

One of the most desirable attributes of Linux is its ability to run on nearly all desktop and server hardware systems.

If you have an old PC tucked somewhere in your closet, fret not-- just breathe some life into it using some resource-friendly lightweight flavors.

Some of the lightweight Linux distributions that are tailored for low-end PC specifications include Linux Lite, Puppy Linux, TinyCore and AntiX. Most of these only require 512 MB or less RAM, 5GB of hard drive space and a Pentium2 processor.

If security and privacy are your topmost priorities, Tails OS will do the job. Some distributions like Black Arch, Parrot OS, and Kali Linux are designed to carry out security-related tasks such as penetration tests to uncover vulnerabilities and weaknesses in the systems.

Apart from being a free and open-source system, Linux is community-driven with thousands of vibrant developers making their contributions to the kernel and software applications every hour.

Community support means you can get easy solutions to common problems encountered by Linux users in seconds.

If you're looking for a vibrant and friendly community, Ubuntu should be at the top of your list. There are dozens of Ubuntu forums that offer insights and solutions to problems that users encounter on a day-to-day basis.

Okay, it's time to choose your Linux distro

Okay, that should be enough to get you started!

Now you know how to choose a Linux editor. So it's time to start digging and figure out what matters most to you and choose the best distro to get started.

If you're ready to compare some Linux flavors side-by-side, check out our comparison of the best Linux distributions for beginners to see which ones we like.

But do you know what the best news is?

You don't need to marry one distro forever.

In fact,  you'll probably need to play with several different Linux flavors before finding the one that's the perfect fit for you.

So don't let the number of choices hold you back. Just pick one that feels right and dive right in. You'll only learn what you like (or don't) through experience!