How to Flush DNS Cache on Windows, Linux, and macOS 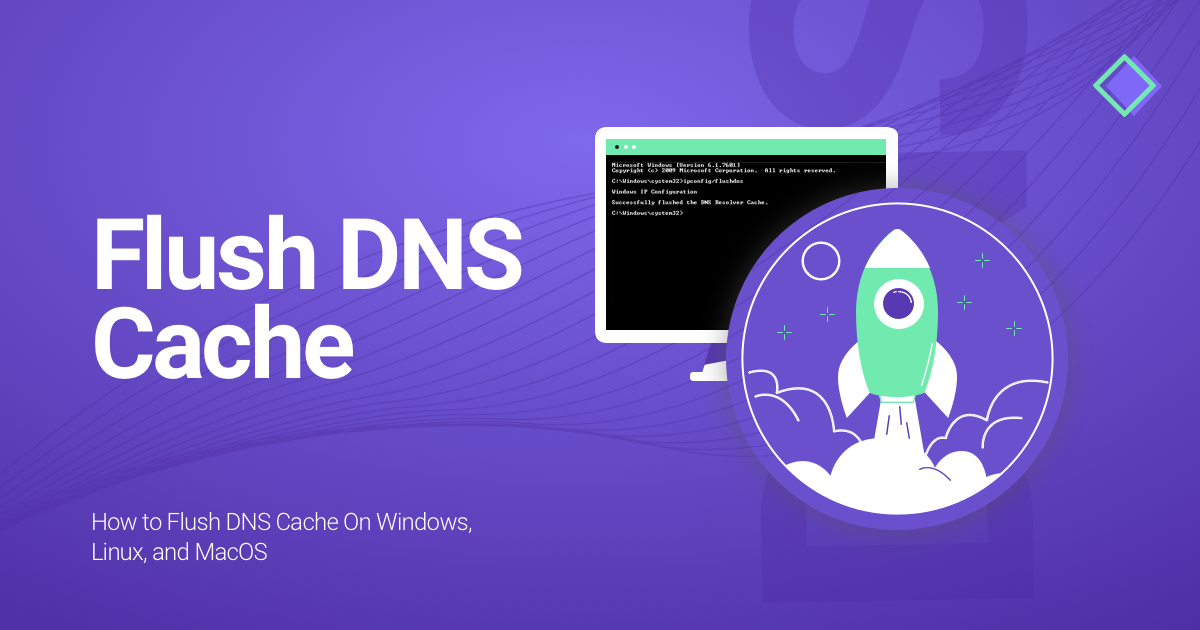 If you're having issues connecting to certain websites, it's probably time to clear your DNS cache. In this post, we'll cover exactly how to flush your DNS cache and why it actually matters...

What is the Domain Name System (DNS)?

The Domain Name System (DNS) is a naming system for devices or services connected to the internet which converts domain names into IP addresses.

The DNS cache present in your device contains all the domain names converted into IP addresses, which makes accessing them faster because it is no longer necessary to process the conversion every single time a request to websites you've already visited is made. However, sometimes it can be useful to flush this cache – keep reading to find out how...

The Benefits of Periodically Flushing Your DNS Cache

The answer to some common problems you might face when building and setting up new sites and changing domain names can be flushing the DNS cache on your device locally.

Here's why regularly clearing your DNS cache is important:

Your DNS cache files are the main target of DNS Spoofing, which is a type of attack that alters DNS records in order to redirect online traffic to a fraudulent website that resembles its intended destination. This is dangerous because you may unknowingly be passing on your personal information (such as login credentials or even payment information) to this fake website.

Flushing your DNS cache empties it of most files (except those related to automatic updates), which significantly reduces the chances of this happening...

If your website doesn’t load on a particular device but loads on other devices, it’s most likely due to DNS caching issue.

By flushing your DNS cache, the wrong IP address entry will be removed and the right/up-to-date IP address will be used when the next request is made.

Since there are a number of popular DNS providers, such as DNS Made Easy or Cloudflare – you might run into problems if you’ve recently changed your DNS provider but your cache still contains the data with the data from your old DNS provider – like the websites that you’ve been accessing regularly.

When this is the case, your devices will still be using the old records instead of the new records which can be resolved by flushing your DNS cache.

Another benefit of flushing the DNS cache is that it is good practice for maintenance. Although DNS cache files don’t take up a lot of space, the list obviously does grow quickly over time if you don’t flush the cache regularly.

By flushing the cache, records can be properly expunged so resolvers will no longer use now out-of-date information and you can resolve 404 errors you encounter when trying to access certain sites.

When Do I Need To Flush My DNS Cache?

We recommend clearing your DNS cache fairly frequently, especially when performing site migrations (changing DNS servers) or when you're specifically experiencing issues such as not seeing changes propagate when a site migration is supposedly complete.

Even if this is not the case, any outdated DNS cache files might expose you to security vulnerabilities, so our recommendation is to flush the DNS cache occasionally...

How Do I Flush My DNS Cache on macOS?

Here is how to flush your DNS cache on the different version of macOS:

How Do I Flush My DNS Cache on Windows?

How Do I Flush My DNS Cache on Linux?

By default, Ubuntu does not cache DNS entries. However, if you have manually installed a DNS service, such as name service caching daemon (nscd), then you can periodically flush the DNS cache. The method provided below will show you how you can flush your DNS cache.

For this reason, it’s important that you flush the DNS cache periodically.

Thankfully, the steps for flushing the DNS cache for macOS, Windows, and Linux are easy to follow. If this doesn't resolve your issue – you might also need to clear your browser cache...