It’s the weirdest, most difficult to explain, and perhaps the most productive change I’ve made in my computing life. It’s well worth the learning curve.

Plus, it’s an great way to prove your nerdiness—if that’s been a concern of yours, at least.

I, like many people on Hacker News, recently stumbled across a short piece by Frederik Dudzik titled “Don’t learn Dvorak”. Frederick spent a lot of time learning Dvorak and then subsequently struggled with some of the logistics of using a different keyboard layout. I was surprised at how thoroughly I disagreed with his points, and how different my experience has been.

I first switched to Colemak roughly eight years ago when I was working an editorial job. I don’t remember exactly why—promises of improved typing efficiency, I suppose. As a writer by trade, I was intrigued by any prospect of making my job a little easier.

I took about two weeks to feel confident in Colemak, and perhaps a month before I matched my QWERTY speeds. I wouldn’t say I’ve even become faster in Colemak than I ever was in QWERTY, but I feel more comfortable.

A logical home row goes a long way: arstdhneio. By placing most of the most commonly used keys on your home row, and keeping others in reach of either your index or middle fingers, you can type faster (at least in my experience) and with less digital gymnastics. I won’t claim that it reduces or prevents RSI, but I’ve been happily without any pains ever since the switch. 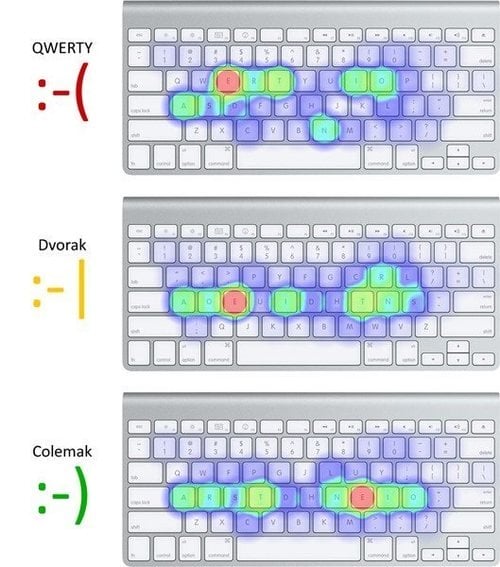 I also enjoy that most keyboard shortcuts remain in place after switching to Colemak. Copy and paste haven’t moved, nor has closing tabs/windows. Others, such as shortcuts to create new folders, have moved but generally seem to be more optimally placed than they are in QWERTY.

Perhaps more importantly for me, using Caps Lock as a backspace key has been a revelation. It takes some practice to get the hang of, using that pesky pinky for such a common action (at least for typo-friendly me), but it’s faster and less strained than the backspace key.

But, as Frederik and others suggested, you can start to forget QWERTY if you’re not careful. Now that I’ve moved my keycaps over to the Colemak layout, there’s no more hunt-and-peck QWERTY for me. I’ve been meaning to spend some time re-learning QWERTY, but nowadays I see little use. I rarely use another person’s keyboard, so I don’t see this is much of a con—your experience may vary.

But, let me share a particularly cringe-worthy story: As I was preparing applications to graduate school, I had to take the Graduate Record Examination (GRE). I studied and prepped and felt impeccably prepared, right up until I sat down at the testing computer and remembered that I would need to write an essay.

In QWERTY. Cue panic, frustration, lots of hunt-and-peck, and a terrible essay. In the end, I still got into my dream school, so, disaster averted.

QWERTY forgetfulness has been the most significant downside of learning Colemak, but the damage is limited—I hop on my wife’s computer for about 5 minutes every month. I can’t remember the last time I used a friend’s computer, even.

If you’re interested in learning Colemak, I have a few recommendations from my experiences. First, print out a diagram of the Colemak layout and tape it to the bottom of your monitor. As you start learning, you can reference this layout without looking at the keyboard itself. When your brain finally remaps itself, you can begin to ditch the printed layout for accurate touch-typing. 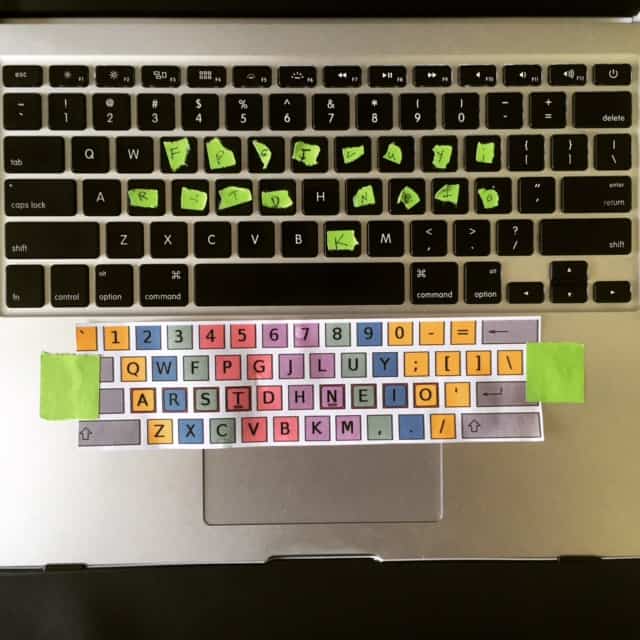 Make sure you can easily switch between layouts, either with an applet or a keyboard shortcut. Linux, OS X, and Windows are all capable of this one way or another. In Windows, which I only use for gaming, the tilde key switches between layouts—useful for making sure I can properly WASD in games.

Be patient with yourself, too. Don’t be zealous about the switch—it’s okay to turn back to the comforts of QWERTY if you’re struggling. As Frederik said, the first few days of remapping your muscle memory are excruciating.

Want to try Colemak out on your VPS right now? SSH in and type the following:

Colemak comes built into Linux distributions, so there’s nothing to download. To switch back, omit the -variant colemak portion.

Have fun learning! Enjoy the journey to, hopefully, a weird and surprisingly comfortable way to make your computing day-to-day better. Let me know how it goes for you, too—type me up an email (in Colemak only!) at [email protected].