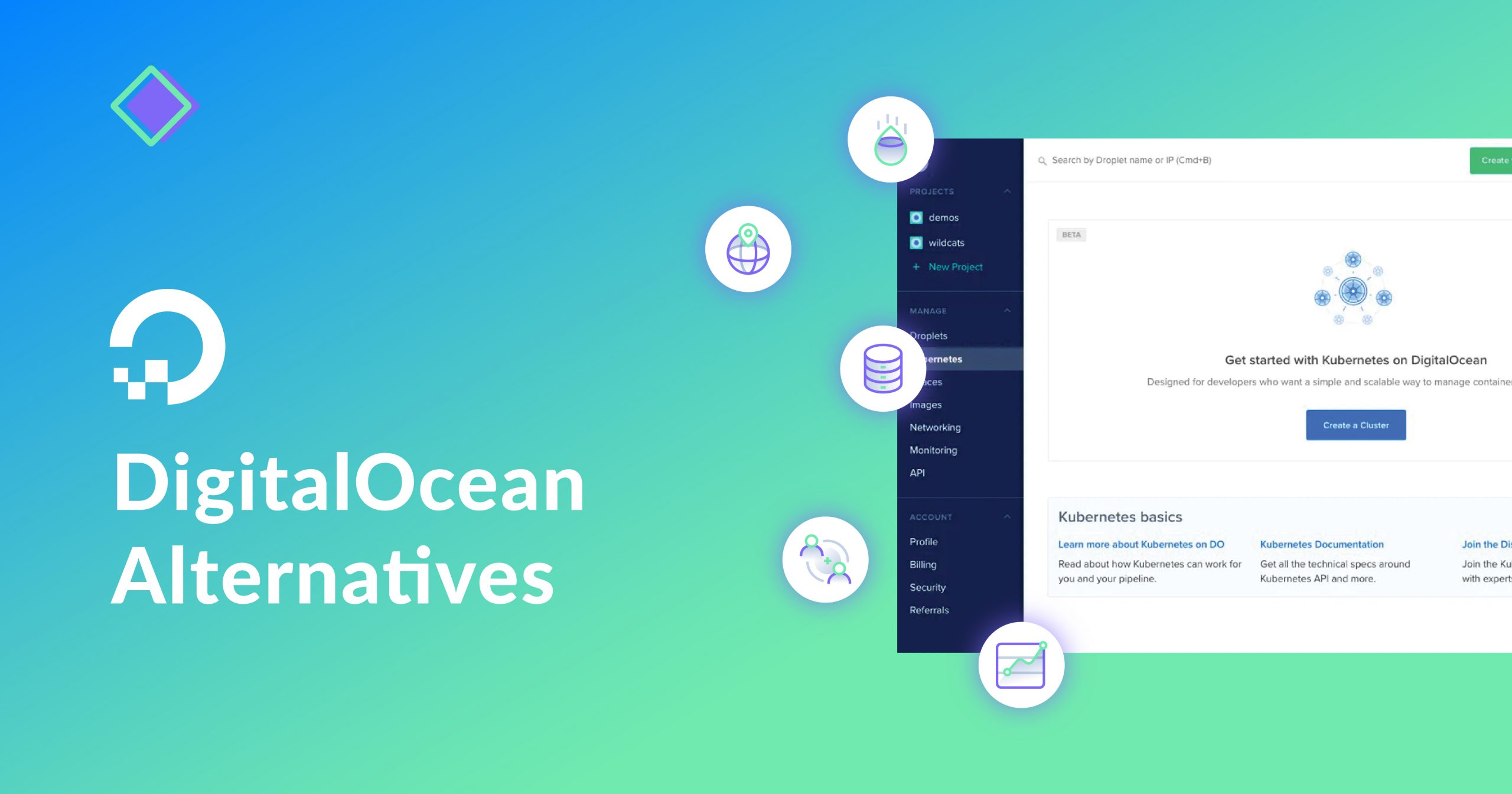 For many years, DigitalOcean has been a favorite among developers when it comes to hosting web apps and projects. Having started back in 2011, it started seeing a more significant increase in growth after 2013. It was then that DigitalOcean started offering SSD-based virtual machines as a cloud hosting service.

DigitalOcean has focused on transforming the way individual, enterprise, and entrepreneurial developers host right from the get-go, and it has come a long way. It has provided its many users with an easier way to take care of their development infrastructure without the need for constant personal maintenance on their own side. And it has done this simply through providing cloud hosting.

Still, some of its users eventually outgrow DigitalOcean and look for alternatives. This can happen for plenty of reasons — searching for better pricing, improved functionality, and greater storage capacity are some of the motivations you could have for looking into switching away from DigitalOcean.

But, since finding an alternative can be time-consuming, we did the legwork for you and compiled a shortlist of the best DigitalOcean alternatives. Much like DigitalOcean, these also offer VPS cloud hosting services.

How These DigitalOcean Alternatives Compare To Traditional Hosting

When looking for hosting options and alternatives, bear in mind there are different kinds that suit different needs. DigitalOcean provides cloud hosting, which has recently become far more popular than the more traditional web hosting.

The main difference between cloud and traditional hosting is in the servers at your disposal.

If you go for a traditional web hosting, you get a single server to host your web project. Depending on what kind of traditional hosting you chose, usually, it can either be a dedicated hosting server only for you or a shared hosting where other web projects are hosted on the same server as your own.

Cloud hosting services, on the other hand, host your projects on multiple servers at the same time. All these servers are synchronized with each other so that they can ensure your website doesn't experience downtime even if one of them has technical issues, for example.

One of the major advantages this kind of hosting has over traditional hosting is the added flexibility.

If the server has to undergo maintenance, hosting will be temporarily disabled when it comes to traditional hosting, but not with cloud hosting. Some bigger companies still opt for maintaining traditional dedicated servers for their sites, but for anyone else, the added flexibility provided by cloud hosting makes it a far more popular choice.

Having your project hosted on multiple servers also eases the workload on them, and provides better security in general. When buying cloud services, the payment options are also more flexible than traditional hosting, because you usually pay for what you use instead of a fixed amount of storage and processing.

Without further ado, let’s go through our list of DigitalOcean alternatives that offer cloud hosting. 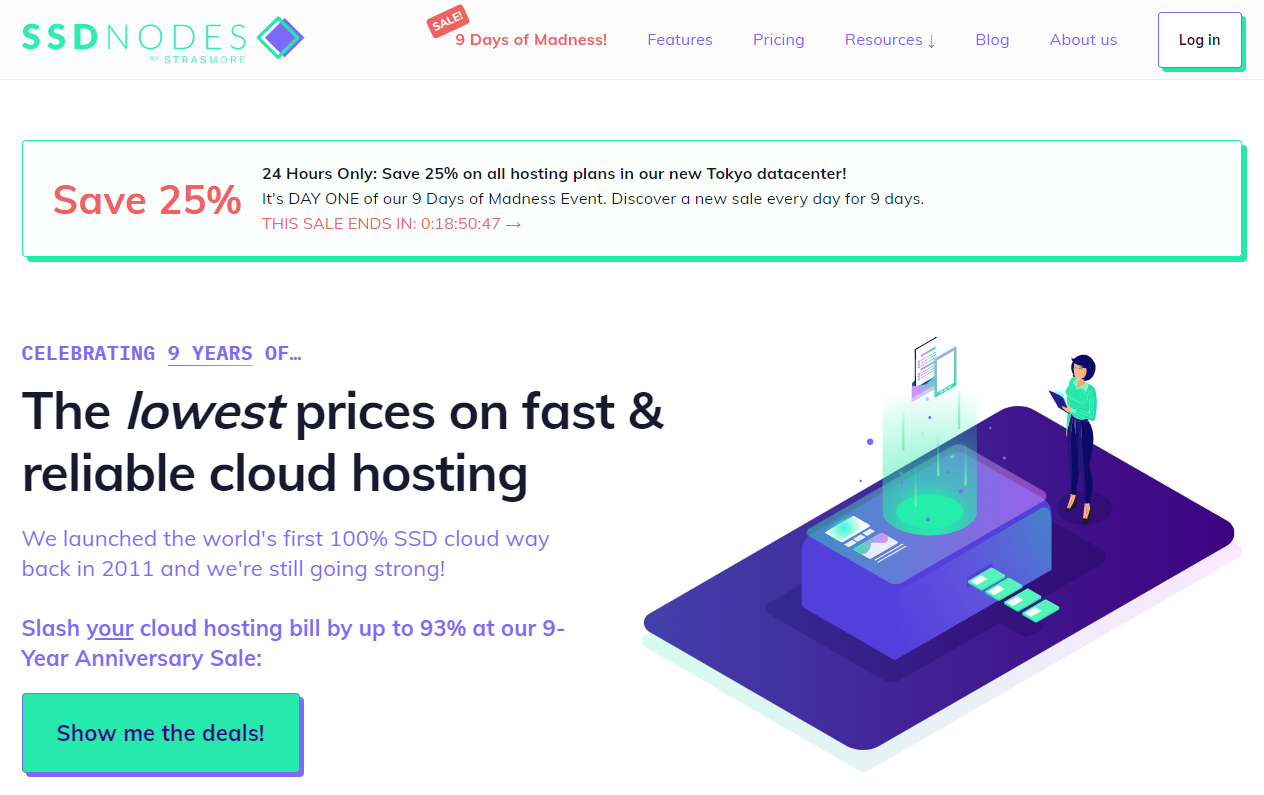 It’s only appropriate to start the comparison by talking about SSD Nodes. Obviously – we are a bit biased but SSD Nodes truly does have a number of advantages that make it stand out as one of, if not, the best DigitalOcean alternative.

First things first – value for money. SSD Nodes is a more affordable alternative to DigitalOcean's Droplets, you get far more bang for your buck when you compare the resources you get for $ invested, and that’s also applicable for some of the other alternatives on this list.

SSD Nodes’ hosting options are rich in features and ensure there won’t be any downtime in case of technical issues.

SSD Nodes also has a responsive customer support team that can answer all of your questions in detail. And the team responds fast, usually in a matter of hours.

SSD Nodes offers cloud-hosting plans for 8GB, 16GB, 24GB, and 32GB RAM RAM. Each one of these includes:

Prices are even lower for a yearly, and lowest for a three-yearly subscription. For example, the 19$ per month option can alternatively be replaced with a $59 yearly payment if bought for three years, which is $4.91 per month. There is also the possibility of automated daily backups for data for an additional monthly fee which depends on the plan.

Vultr is another decent replacement for DigitalOcean. It provides developers with the possibility of creating local projects that can be deployed globally.

This is due to its large worldwide network of over 17 locations. While it doesn’t outnumber the SSD Nodes network, it still enables users to easily scale a low latency infrastructure solution around the globe.

Among their offers, you will find various options including cloud hosting services as well as dedicated servers and block storage. Vultr provides excellent performance and high-level security as well.

The company also has an online customer support service, responsive and accessible through the dashboard.

Vultr offers cloud hosting, dedicated servers and clouds, object and block storage as well as load balancers. The prices for every option are displayed on their website.

For cloud hosting, the prices vary according to RAM and SSD memory. Some of the prices include:

Linode provides cloud hosting for over 400,000 customers around the world. It has 8 data centers at its disposal, situated in America, Europe, and Asia.

Linode is fairly simplified when compared to most of its competitors. It offers cloud server storage for Linux-based systems, specifically for the Alpine, CentOS8, Fedora, and Ubuntu distributions.

This hosting service has one of the simplest cloud hosting dashboards. It allows users to quickly deploy strong cloud servers through the usage of a native SSD storage on a 40 Gbit network of Intel E5 processor servers.

Linode offers a variety of shared, dedicated CPU, high memory, and GPU plans. They are classified into a comprehensive pricing system. Some examples of shared plans include:

Another famous cloud hosting brand, UpCloud has been around since 2011, just like DigitalOcean. It offers highly customizable cloud hosting options targeted at enterprises and individual developers alike.

The company has offices in 4 countries as well as 8 data centers across 3 continents: North America, Asia, and Europe. Its services include cloud hosting, block storage, and software-defined networking.

UpCloud also provides online customer support, claiming it takes their agents on average 1m 37s to answer client questions. Except for live chat, support is available through e-mail and phone 24/7. They also give out detailed tutorials in their documentation as well as the community section.

UpCloud gives out account credits to users that provide for the community. These are used for billing, so getting them is an actual incentive for members to contribute to the betterment of the community.

Its security measures also include two-factor authentication as well as customizable system privileges for site users. Another strong security feat is the firewall that you can customize as well, setting up rules as you see fit.

Unlike competitors, UpCloud charges per hour of usage. This means that if you decide to turn the servers off for an hour or two, you will not pay for those hours. While you pay for hours, you are billed monthly. Billing is done through credits that represent real currency linked to your account, which you can use to purchase UpCloud related products and services.

Here are some examples of simple pricing plans:

Pricing for flexible plans depends on the combination of parameters. They also offer paid backups and other extras such as custom images, firewall, floating IP, and more.

The Search For The Best DigitalOcean Alternative

This is a short overview of how DigitalOcean alternatives compare to each other. The comparison of these four cloud hosting providers, SSD Nodes, Vultr, Linode, and Upcloud, should give you an idea about which option will suit you best.

As the numbers show, when it comes to performance compared to affordability, SSD Nodes tends to have the upper hand here.

SSD Nodes aims to provide reliable and cost-effective VPS cloud hosting to everyone. If you want to compare VPS host solutions, make sure to check out our article on the subject.

If you’re looking for the best value for money, SSD Nodes is definitely going to live up to your expectations.