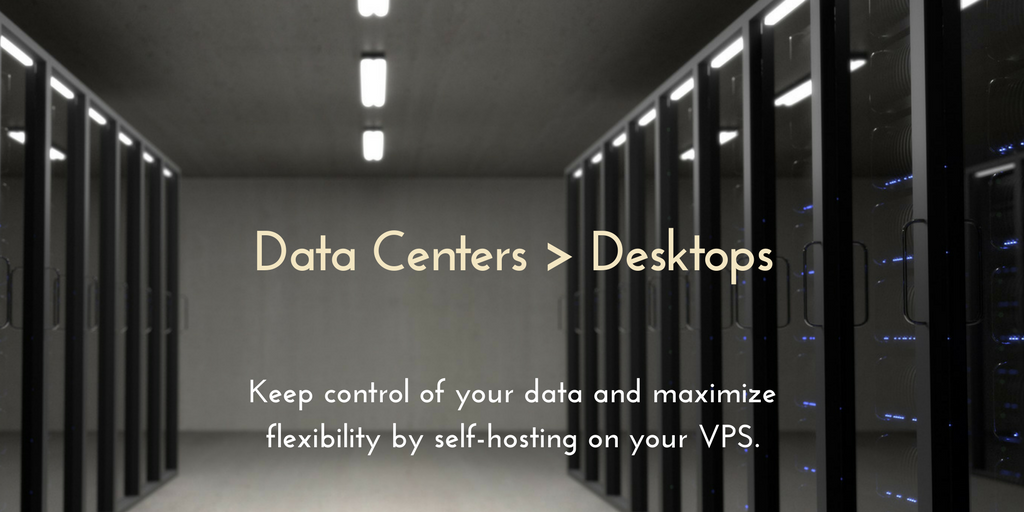 Many of those just dipping their toes into hosting web services, or trying to learn at a young age, tend to ask what seems like a rather benign question: “Why can’t I just host from my desktop rather than pay for a server?”

Of course, hosting certain services via your home computer is possible, particularly for personal use, or with a very small network of close friends.

But, we highly recommend you seriously consider the pros and cons of hosting from your desktop versus putting your services in the cloud via a virtual private server (VPS).

This just might be the beginning and end of the discussion. Unless you’re using a business-level plan, your internet service provider (ISP) likely has an item in their Terms of Service (TOS) that restricts the use of public-facing servers.

For example, I have Cox as my home internet—item #5 on their TOS is rather clear about this matter:

Because you use your ISP to access the internet day in and day out, you probably should avoid activity that they don’t allow.

On top of that, there’s a good chance your ISP also blocks port 80, which would make a web server inaccessible unless you run it on an alternative port and have any users type that port in after your IP address or domain name.

Any device connected to the internet is at some degree of risk of being hacked. That could be because of a weak password, a vulnerability in installed software, or user error. That’s just one of the downsides of working on the internet.

When you host public-facing servers via your desktop, you open up not only that machine, but also all of the other devices on your network, to attacks. If you have any sensitive material on your desktop, you could be in for a world of hurt unless you know exactly what you’re doing, security-wise, to protect yourself from attacks.

Same goes for a VPS, of course, but at least in that situation you’ve set up some separation between your server and the material you keep on your own desktop machine.

3. Data centers are purpose-built to deal with a DDoS

Much like hacks, a distributed denial of service (DDoS) is an inevitability for those who run popular public services. Game servers are particularly vulnerable.

If your desktop host gets DDoSed, your ISP is going to be unhappy. At best, they suspend your service as they try to mitigate the issue, and won’t have much motivation to get you connected again. And, during that time, you’re completely offline.

A data center has both software and hardware built-in to help mitigate the damage caused by a DDoS. It’s not a guarantee that your service will stay online, but it does give you a platform to recover from. Plus, you can connect your server to a service like CloudFlare to at least serve a cached version of your site while the DDoS peters out.

4. Your power and internet aren’t reliable

How many times has either your power or your internet gone down in the last month? The last year? If you can count even just a few instances, you’re already less reliable that your average data center.

Add to that the number of times your router decides to freeze up, requiring you to power cycle it. Or, even when you have to reboot your computer to install some updates.

All of our data centers use multiple, redundant ISPs in order to ensure that if one goes down, another will be available to handle the traffic. Same goes for power—backup solutions will keep servers humming until full power is restored.

Even if you have a top-tier gaming desktop, it generally can’t beat out the processing power of purpose-built server hardware.

For example, SSD Nodes is powered by best-in-class Intel E5 v4 processors—if you want desktop processor that matches the performance, you’re looking at a $500+ investment. Add to that a few SSDs running in a RAID 10 configuration, and it’ll be tough to beat without dropping some serious cash—far more than running a VPS for a few years, even.

Plus, if you have a nice gaming machine, you’ll probably want to use it for, you know, gaming every now and then. While your desktop is busy pushing pixels, you’ll likely see significant slow-downs on page rendering and other hosting tasks.

Behind every domain name (e.g. ssdnodes.com) is an IP address. That conversion is possible thanks to DNS servers, although these rely on having stable IP addresses to connect to.

If you’re using residential internet, there’s a good chance that your public IP address changes every now and then. You probably don’t even notice it. But if you’re running a web server and your IP address changes, the DNS won’t know where to look.

In the end, the choice is yours

Years ago, hosting servers via home desktops was much more common, as buying a VPS was prohibitively expensive for many. But, the costs of running a data center have fallen dramatically, and continue to do so. That means lower costs for customers, which means the VPS is accessible to more people than ever before.

But, it’s not for everyone. Hosting from home can be an incredible educational experience—no doubt many of today’s programmers and developers started in exactly that way. For those with a willingness to learn and a heavy dose of bravery,

Those who simply get up and running quickly will find a VPS to be the go-to solution no matter the application. For a few dollars a month, fast and reliable service is within reach—with all of the benefits of a data center plus all of the flexibility of running just about anything.