Once, in a Hangouts meeting between CEO Matt Connor and myself, one of us said something along the lines of, “We need to to be more than a blinking cursor on a distant server.”

I can’t tell you which of us said it. This happens a lot, especially when we think big, say something meaningful, and then put it on the backburner for six months while I think it was me, but I tend to think I’m more brilliant than I actually am.

Of course, the who doesn’t actually matter here.

No, wait, the who really does matter. Okay, let’s take a step back and talk about the problem that inspired that little gem of wisdom.

The problem of a blank product

In case you aren’t familiar with what we do: We sell virtual private servers (VPSs), which are a terminal-only instance of the Linux operating system. It looks like this. 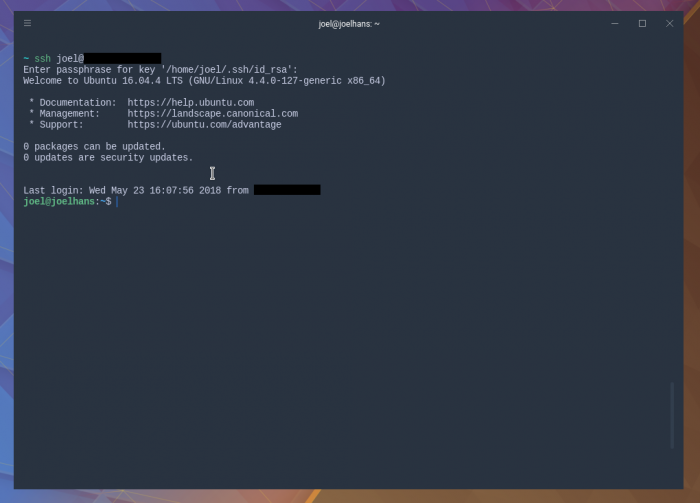 That’s our product. We can add other things on top of that, or build a fancy dashboard (which we’ve done already) to administer that server, but at the end of the day, that’s the experience we’re selling. A blinking cursor on a distant server.

There are dozens and dozens of VPS providers out there. We’re all selling more or less the same product. Our infrastructures and underlying technologies might be different, but customers only really care about that end product. They care about the cursor.

That brings us back to the quote in question. How do we get people to think of us as more than a blinking cursor? How do we convince them that we’re something more? How can we be both a low-cost provider and a trusted provider? These are the kinds of questions that get Matt riled up and ready to build. The only problem is that, sometimes, we’re not sure exactly what that should be.

The consequences of being faceless

To arrive at the answer to those questions, let’s first take a detour into what we don’t want to do.

Matt recently told me about a new cloud computing provider called Paperspace. They’re focused primarily on AI/ML applications, per their FAQ: “It’s perfect for gaming, VFX, Machine Learning, or running as a full virtual desktop infrastructure (VDI).” Paperspace isn’t exactly a competitor of ours, as the applications are entirely different, but they’re in the same ballpark. Let’s say they’re the ones selling cotton candy and we’re the ones selling beer.

Maybe it’s the other way around.

But they too are selling the same product: a blinking cursor on a distant server. We’re just targeting very different kinds of people who want to use that blinking cursor.

Matt didn’t just bring Paperspace to my attention because of their unique application. He did so because he noticed that, no matter where you look on the Paperspace site, you can’t find a single mention of the company’s founders or staff. Their about page is filled with links to press coverage but contains no bios, or even a photograph of the team. 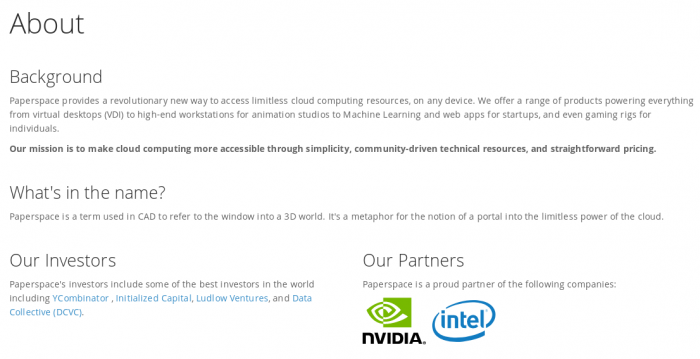 Not only are they a distant, blinking cursor, but they’re also faceless.

I can’t argue that one strategy is better than the other. Users react to each in different ways depending on dozens of variables. It’s less about how customers respond and more about how a company wants to project itself. And looking at Paperspace has been a valuable lesson in what we don’t want to be.

What does SSD Nodes want to be?

We want to be the kind of company that builds trust and makes connections with what we say. Having others say kind things about us is nice, but we’re not going to use it as a crutch.

So, we’re developing a different kind of strategy for talking about ourselves in the near future. Long-term, too, if things go well.

We want to be open about where we stand

We’ve found that users like to know what we’ve been working on, regardless of whether or not we have a new feature or product we’re ready to announce. That consistent dialog is vital to prove, so to speak, that we’re making progress behind the scenes.

There are a lot of things we can’t talk about, yet or ever, for a variety of reasons, but whenever there’s movement on a feature or product change that will affect our users, they’re going to hear about it.

Specificity is fabulous when you can get it, but most of running a technology business is making a change, watching for changes in our data, quickly iterating on it to make improvements, and so on. It’s hard to know where any given project will end up when you start.

In a recent post about our beta dashboard, I wrote both about some specific features we’re planning on adding shortly. I also wrote about other wish-list experiences that might never happen. They’re equally important as to how we approach any given day’s work, and so we’ll always make sure they get equal treatment in how we talk about our future.

We want you to know who we are

We don’t need you to imagine our faces every time you SSH into an SSD Nodes server, but we do want you to know who we are, what we look like, and what makes us tick (and what makes us happy!). That’s why we’ve started putting our faces on blog posts, for example (see mine below, for better or worse), and started talking more about ourselves as real people, not just people who are filling specific roles for the time being.

Don’t call it a cult of personality—it’s just a small way to help remind you—and ourselves—that we’re still in the business of human ambition and passion, even if we’re “just” a blinking cursor.

Or, what do you do to remind yourself, or others, that you’re more than face value?

Feel free to let us know in the comments. We’ve re-enabled them for select posts as part of this ongoing effort to be more than a blinking cursor on a distant server. Now we can also be a blinking cursor in a <textarea>, too.